Last month I accepted an offer from Yahoo! and moved to the Silicon Valley. I had been living in Atlanta for the last 3 years and had made quite a few good friends there. So leaving was harder than I thought it would be, but I was really excited about the new job. This was an opportunity to join a company which is synonymous with the web and work with some really smart people.

Anyway it has been almost a month since I started with Yahoo! and it has been a very interesting experience so far. I’ve never seen a company which runs completely on open-source software. Most of the development work here happens in C++, Perl and PHP on Linux and FreeBSD. Yahoo! contributes back to the community heavily and employs quite a few open-source hackers. (Rasmus Lerdorf from PHP, Jeremy Zawodny from MySQL, Doug Cutting from Lucene/Nutch/Hadoop, just to name a few.)

I was doing Java development before, so was used to doing coding in Windows using Eclipse. So initially I thought of doing development in my Windows laptop using some IDE, but later decided to do my work in Linux using Emacs. The project I work on is deployed in FreeBSD, so I do development in Linux and deploy it in a FreeBSD virtual machine hosted in my Linux workstation using vmware. It’s a pretty cool set up and I’ve become a big fan of virtualization at the OS level. 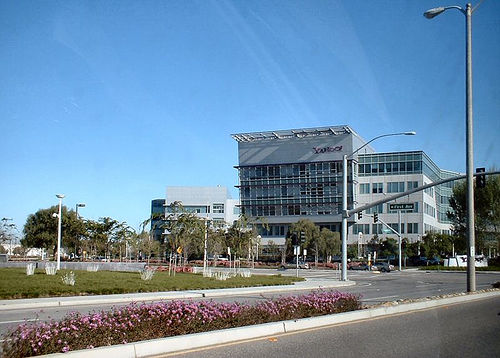 Yahoo! office in Sunnyvale, California where I work. There are 7 buildings in the Sunnyvale campus. There are two more campuses in the nearby Santa Clara and many satellite offices across the U.S. and around the world.

I’m trying to familiarize myself with the code base and understand the architecture of the whole system. It’s complex and the scale of deployment is challenging. I believe in learning things by doing hands-on work, so I’m working on a bunch of new features. The work environment is casual and the people here are very easy-going and helpful. I’m having a lot of fun.